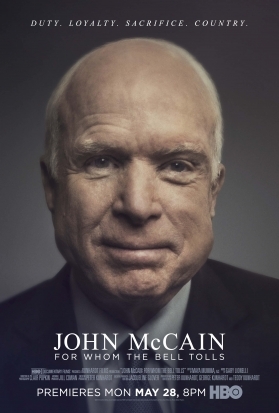 John McCain has often said that Ernest Hemingway’s For Whom the Bell Tolls is his favorite book, with its lead character, Robert Jordan, appealing to McCain’s sense of duty and perseverance in the face of extreme, even impossible odds. Today, with his wife Cindy at his home in Arizona, the six-term senator from Arizona is buoyed by the novel’s themes as he battles brain cancer, which was diagnosed in 2017. In the face of a grim diagnosis, he remains upbeat and grateful. “You will never talk to anyone as fortunate as John McCain,” he says.

John McCain’s extraordinary life began with a childhood that was seeped in the discipline and morality of the U.S. military. Both his father and grandfather were Admirals in the Navy; McCain III was born in 1936, when his father and mother were stationed in the Panama Canal Zone. From a young age McCain wanted to fly, and after marrying his first wife Carol he enlisted as a Navy pilot during Vietnam. Shot down in 1967 while flying over North Vietnam, he endured five years in the “Hanoi Hilton” POW camp, half of which was in solitary confinement. His captors, looking to capitalize on his status as an Admiral’s son, forced him to make a propaganda “statement” that he admits made him ashamed. Released in 1973 (his injuries prevented him from raising his hands over his head), he returned home and saw his first marriage fall apart; he married his current wife Cindy in 1980. McCain returned to active duty, but got a “bug for politics” while serving as a Navy liaison for the Senate, and in 1982 ran as a Republican for a vacant House seat in Arizona. Despite accusations that he was a “carpetbagger” with few ties to the state, he won. A relationship with banker Charles Keating would eventually come back to torment McCain when, after he was elected to the Senate in 1987 (succeeding Barry Goldwater), he and five other senators – the “Keating 5” – were accused of using their influence to advance Keating’s agenda. Scarred by the scandal, McCain vowed to hold himself to the highest ideals going forward; running for President in 2000, he famously said he would “never lie” to the American people.

The film follows many watershed moments in McCain’s political career, emphasizing the friendships he forged with the press and, notably, with senators across the aisle, from Joe Lieberman (an Independent who was almost his running mate in 2008) to John Kerry and Ted Kennedy. Though Kerry, also a veteran, became a vocal critic of the Vietnam War, he and McCain found common ground in advancing legislation that provided closure for families of missing soldiers, while normalizing ties with Vietnam. Also detailed are McCain’s two failed presidential bids: in 2000, when he won the New Hampshire primary but lost the nomination to George W. Bush after a campaign marked by negative ads and innuendo (his and Cindy’s adoption of a Bangladeshi girl was pounced on in Southern states), and in 2008, when he was doomed by President Bush’s low approval ratings and the financial collapse, losing to the then-candidate of change, Barack Obama (who praises McCain’s grace in conceding defeat).

McCain’s cancer diagnosis has limited his recent appearances in Washington; a notable exception was his dramatic 2017 speech chastising party-line agendas, after which he cast a deciding “nay” vote that killed a Republican-sponsored bill to replace Obamacare. To the end, McCain has remained a maverick, championing causes close to his heart while remaining willing to find compromise. As his longtime colleagues, friends and family get emotional describing their affection for the senator, McCain, back home in Arizona, says “Robert Jordan is still my hero … It’s been a great life, and one worth fighting for.”