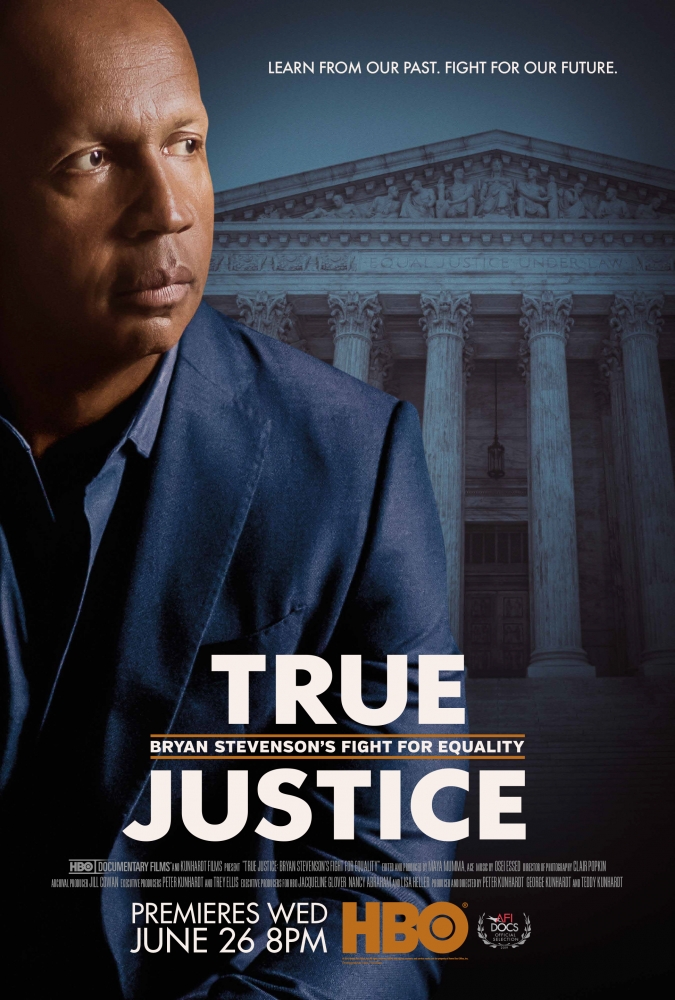 In the last half-century, America has become the nation with the highest rate of incarceration in the world, authorized the execution of hundreds of condemned prisoners and continued to struggle to recover from a long history of racial injustice.

For more than three decades, Alabama public interest attorney Bryan Stevenson, Founder and Executive Director of the Equal Justice Initiative, has advocated on behalf of the poor, the incarcerated and the condemned, seeking to eradicate racial discrimination in the criminal justice system. An intimate portrait of this remarkable man, True Justice: Bryan Stevenson’s Fight for Equality follows his struggle to create greater fairness in the system and shows how racial injustice emerged, evolved and continues to threaten the country, challenging viewers to confront it.

Told primarily in his own words, True Justice shares Bryan Stevenson’s experience with a criminal justice system that, he asserts, “treats you better if you’re rich and guilty than if you’re poor and innocent.” The burden of facing this system is explored in candid interviews with associates, close family members and clients.

This feature documentary focuses on Stevenson’s life and career – particularly his indictment of the U.S. criminal justice system for its role in codifying modern systemic racism – and tracks the intertwined histories of slavery, lynching, segregation and mass incarceration. Highlighting watershed moments involving cases and clients, True Justice offers a rare glimpse into the human struggle that is required when the poor and people of color are wrongly condemned or unfairly sentenced, and explores the personal toll it has taken on Stevenson and his colleagues.

The film chronicles Stevenson’s work in Alabama, birthplace of the civil rights movement and home to the Equal Justice Initiative, as well as the early influences that drove him to become an advocate for the poor and the incarcerated. As a young lawyer in the 1980s, he witnessed firsthand how courts unfairly applied the death penalty based on race and how the Supreme Court ultimately declared that racial bias in the administration of the death penalty was “inevitable.”

Tracing the trajectory of the Court since the 1857 Dred Scott decision, which ruled that African Americans are not citizens of the U.S., True Justice shows how the Court has long sanctioned inequality, oppression and violence. Illuminating the power of memory in cultural change, the film instills hope of a brighter American future through the insights of this pioneer.

The film also documents the monumental opening one year ago, on April 26, 2018, of the Equal Justice Initiative’s Legacy Museum and its National Memorial for Peace and Justice, the country’s only lynching memorial, which is dedicated to the more than 4,400 African American victims of lynching. These sites are part of the EJI’s nationwide effort to engage in a truth and reconciliation process around this country’s legacy of Native American genocide, slavery, lynching and racial segregation. As part of the campaign, Stevenson and the EJI are also working with communities to recognize lynching victims by collecting soil from lynching sites and erecting historical markers.

True Justice: Bryan Stevenson’s Fight for Equality reveals a history that can’t be forgotten in the pursuit of genuine justice.

In 2014, Stevenson published his critically acclaimed memoir, Just Mercy: A Story of Justice and Redemption, which, like True Justice, focuses on his life’s work and most memorable cases. Just Mercy has spent more than three years on the New York Times bestseller list and has received several literary nonfiction awards, including a Carnegie Medal and an NAACP Image Award. Stevenson is also a recipient of the MacArthur Genius Grant, among other honors.